This reading and listening exercise is about the Spanish festival La Feria de Abril. This is suitable for level B1 Spanish students.

Every year, two weeks after Semana Santa, Seville bursts with even more colour and life when it celebrates la Feria de Abril (the April Fair). Originally, the fair was a livestock fair but over time it has grown into a six-day party starting at midnight on Monday and finishing the following Sunday. Officially, there are no holidays; children attend school and people still have to go to work.

The first night is called el Alumbrado de la Portada, because the main entrance to the fair ground is lit up at midnight. Traditionally, people agree to meet by the portada. The site itself is full of stripey green or red marquees called casetas and there is a large area next to the casetas with an amusement park called la calle del infierno (Hell road) probably because it is incredibly noisy and full of people! During the day, people go to see los paseos de los caballos: horse carriages and also single riders who dress in the traditional amazona suit with wide brimmed hats. The casetas are owned by important local families, clubs, associations and even political parties.

There is plenty to eat and drink, mostly people drink fino or manzanilla wines and eat all kinds of tapas, like tortilla de patata, fried fish and cured ham. Of course everything ends with a bang, there are fireworks at midnight on the last day!

Music plays non-stop, especially sevillanas that people dance to. Sevillanas are a traditional song and a traditional dance. The dancers are either two women or a man and a woman; it is always danced in pairs. The song itself is divided into four, with each section also being called a sevillana: la primera, la segunda, la tercera and la cuarta (the first, the second, the third, the fourth). All four sevillanas have the same chorus and there are specific steps for each of the four sevillanas. The video below is a traditional sevillana sung by a popular group called Los amigos de Gines. Gines is a small village just outside Seville.

Here are the vocabulary lists associated with this reader: 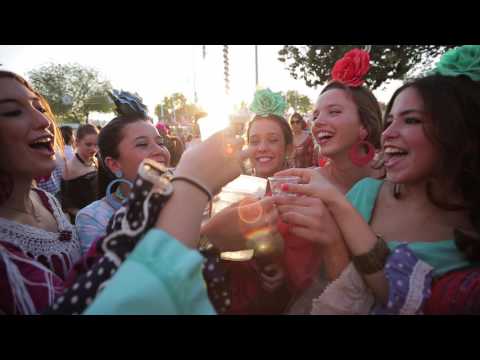 Have you ever been to the Feria? How did you find this exercise? Leave a comment below - we love getting your feedback!