How to Use Bilingual Dictionaries

Bilingual dictionaries are an essential part of every language learner's toolbox, but they can be both a blessing and a curse. Aside from the fact that it's far too easy to look up a word rather than making the effort to remember what you learned, even the act of looking something up can be fraught with difficulty, because students aren't always taught the right way to use bilingual dictionaries. It's not difficult, but it does require more effort than finding the right page and accepting the first word in the list.

One Word ≠ One Translation

Languages are not one-to-one matchups. The vast majority of English words have more than one Spanish equivalent, and many have several. And vice versa. For example, take the Spanish word muñeca. When you look it up,* you're presented with a page full of information: 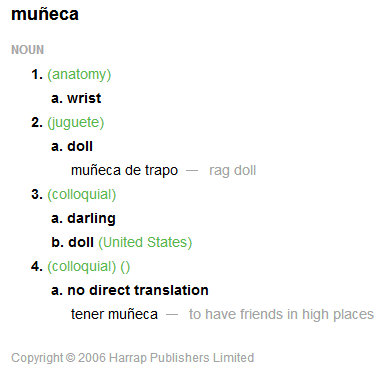 How do you know which of these translations is the one you need? Pay attention to two things:

1. Context - how is the word being used? The word muñeca means different things in these sentences:

2. Notes - look past the translations to all the clues provided: 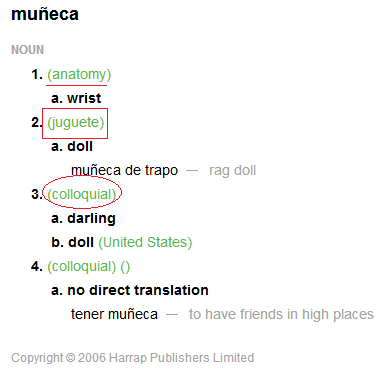 A further complication is sometimes a given verb can be transitive or intransitive in one language, but its equivalent in the other is two distinct verbs. So, again, you need to consider context in order to choose the right translation for "I grow flowers" vs "Flowers grow quickly." 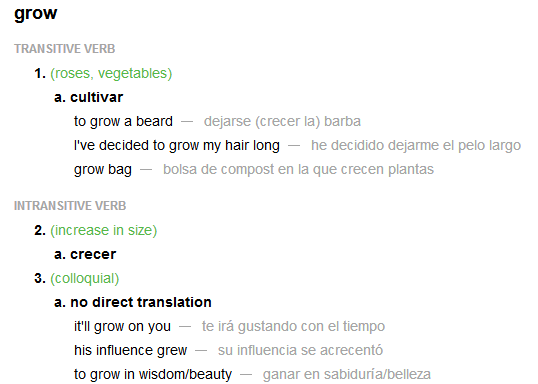 So the Spanish translations are Cultivo flores and Las flores crecen rápidamente.

Many English words belong to two different parts of speech, whereas their Spanish translations are a different word for each. Be sure to choose the translation that corresponds with the part of speech you're actually using. (This is one of the reasons it's so important to understand some essential Spanish grammar terms. If you don't know the difference between a noun and a verb, how can you choose the right translation?) 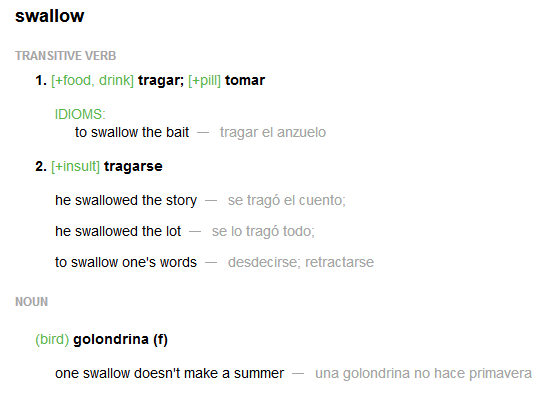 There's also the matter of fixed expressions, where certain words always go together, regardless of whether there's a perfectly good synonym that you might like to use instead.

For example, in English, we can "push" a button or a wheelbarrow, but in Spanish, apretamos un botón and empujamos una carretilla. A good dictionary will have a list of nouns for each verb, but it's impossible to be comprehensive, so further research might be needed. Here's part of the "push" entry: 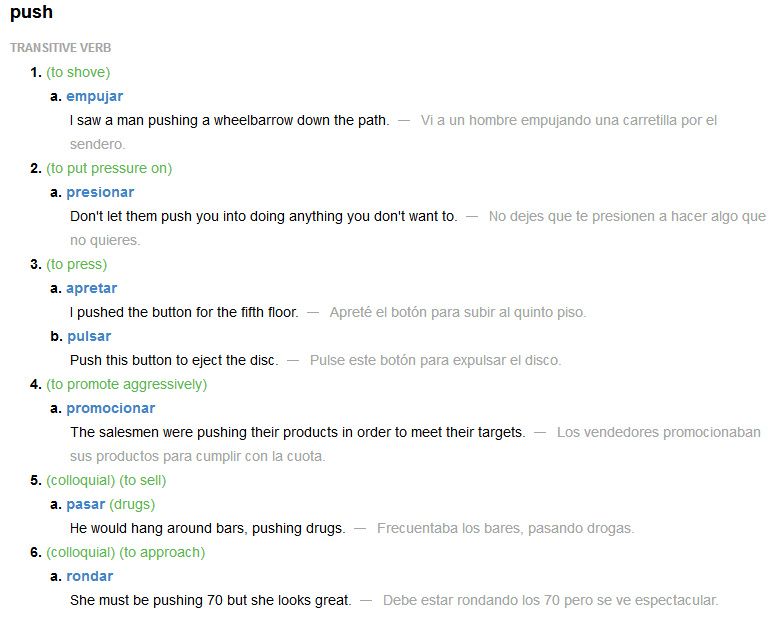 Bilingual dictionaries are essential, but they're not infallible. Read through the entry, look at the examples, and consider how similar each one is to what you're trying to say. If they're inconclusive, look at another dictionary, or try googling your phrase.

And keep working on improving your Spanish grammar, as that will help you use the dictionary even more effectively!